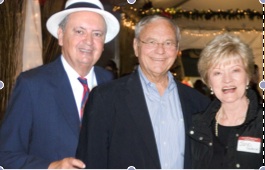 Tempe Sister Cities was founded over forty years ago in 1970. In 1971 the first twinning relationship was established with Skopje, Yugoslavia, now Macedonia. Tempe was the first Sister City program with an Eastern Europe relationship. Tempe Sister Cities now has eight Sister Cities around the globe The newest sister city relationship established is Cusco, Peru. Tempe has also exchanged students with Trolhatten, Sweden for the last five years and hopes to form an official relationship. “My family and I get along perfectly and they are all very close with each other. I’ve only spent a few days here and I’ve already done many nature hikes and seen beautiful things and cities. The thing that surprised me the most was really how similar the people of Sweden are to America. Loving it here.” Writes Jameson Langlois (2013 delegate to Sweden)

“The efforts of the board of directors, student delegates, educator delegates, professional delegates and volunteers continues to make Tempe Sister Cities the number one program in America.
We can all be proud of this recognition and know that Tempe Sister Cities is making a difference in the world through the many international and local community programs in which we support and engage.”
~President Dick Neuheisel