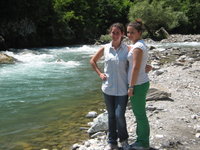 I finally have time to begin my blog! The four of us (Natalie, Sean, David, and I) arrived on Sunday afternoon. We each left with our families and I finally met Sashka and her parents. She lives in a house about ten minutes from the center of the city by bus. Her mother made chicken and potatoes for lunch, saying she would start making more traditional foods the next day. We began the meal with a toast, with the operative word being “na zdravye,” meaning “cheers,” but you also say that when you finish a meal. I have used that word many times so far. Her mother also makes the best lemonade all the time, adding oranges and grapefruit into the squeeze. That night Sashka took me to hang out with her friends at a cafe, a daily occurrence.

There I ordered water, and all of her friends and the waiter stared at me like I was from another planet! No one orders water at a cafe, always juice or coffee or something like that. In fact, people drink very little water and lots of juice, coffee, oftentimes alcohol. So far I have been ordering juices and drinking lemonade with abandon, but I will move on to coffee when I am in more of a haughty mood.

Yesterday Sashka had a German class in the morning, so she had her friend hang out with my while she was gone. It was so sweet! We went to, yep, a cafe. That afternoon Sashka and I went jogging along a grassy path on the Vardar River. I couldn’t believe I was actually running along the river that I had stared at on the map so many times before! Last night we met up with the others to see a play. None of us Americans understood any of it, but the actors were so dramatic it was still entertaining! After we ate at a Macedonian fast food place called Seven, which, ingeniously, serves its huge burgers vertically inside a paper wrapping topped with french fries and a sort of mayonnaise. It was so good. How come no one has come up with that in the U.S?

Today we all went to the Turkish bazaar, on the older side of the Stone Bridge, which separates the newer and older parts of Skopje. It was kind of like the Chinatown of the U.S., except much busier and louder. Everything was mixed together. One might might be selling backpacks while the man next to him is selling strawberries and the man next to him is selling cheese. That’s where I’ll buy the gifts that I’ll bring back; they have everything you could think of. People were everwhere and it was crowded and smelly, like a farmer’s market mixed with a carnival. For lunch we ate kebabs, which look like sausages but taste like hamburger and are eaten with a focaccia-esque bread and onions. They eat onions with everything, but these onions are sweet, less burning than any I’ve had. So good. Afterwards we drank Turkish tea in little glass cups. It was strong and dark, kind of spicy. The Macedonian word for tea is “chai,” so we were a little confused when they ordered it! Today was hot, not Arizona hot, but hot nonetheless, so we decided to end the afternoon there. Sashka took me to ice cream and now I’m about eat fruit (the cherries are the best) and Turkish delight, as in Chronicles-of-Narnia Turkish delight. Here they are always eating or drinking something!

Life is very different here, more so than I expected. Overall, it’s more… relaxed. People walk everywhere, many of them with no set direction it appears. The square was packed at 11:30 on a Tuesday morning, as it was at 11:00 last night. People will sit at cafes for over an hour easily. At a cafe yesterday, we sat there for an hour and a half, and upon leaving, the same people who were at the table next to us before we sat down were still there! It may be important to mention that every third person here is unemployed, but sitting at a cafe all day sure doesn’t sound too too bad. People move at a different pace here, even literally. Their version of walking is more of a sauntering stroll, whereas we Americans move at more of a speedwalk. I admit that slowing down is quite an enjoyable experience. You see more and hear more.

There are a bunch of other random things that are different. In some places in the city people are standing at stoplights, ready to approach your car and wash it to make a little extra money. The toilet paper is orange. Orange! In my house, we wear slippers when we are inside, even though they are more like sandals. Almost everyone speaks English formidably, especially the young people, making me feel silly for knowing just three years’ worth of French. And the bus is a perfectly acceptable, practical, and accessible means of transportation. This is all just so different, sometimes shockingly so, but it’s amazing! I learn about a million new things every day.

I hope to write here much much more, but we’ll be very busy throughout the next weeks. Photos will appear eventually, but until then, na zdravye!