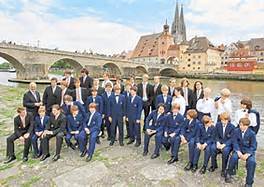 Tempe Sister Cities is hosting The Regensburger Domspatzen (Regensburg Cathedral Choir).  The world-famous boys choir plays a very important role in the cultural life of Regensburg. They have been called the “Singing Ambassadors of the city”.  The Domspatzen will be performing Wednesday,  April 23, 2014 at the Tempe Center for the Arts.

“We are excited to host one of the most famous and oldest boys choirs in the world” . In 1976 Pope Paul VI  congratulated the “Regensburger Domspatzen” on their 1,000th anniversary. The Domspatzen, literally “Cathedral Sparrows”, trace their origins back to the year 975.  In many successful concerts they have won the hearts of their audiences and are welcomed all over the world. They look just as smart in their dark blue suits which they wear in concerts as they do in their red and white liturgical gowns worn during the the services in the Cathedral of St Peter in Regensburg, Germany. The choir’s repertoire comprises music from 16th century chorale to contemporary music. Probably it is their stylistic versatility besides the technical perfection which gives the choir its attractiveness and reputation.

Tickets are on sale now online at the Tempe Center for the Arts-click here.